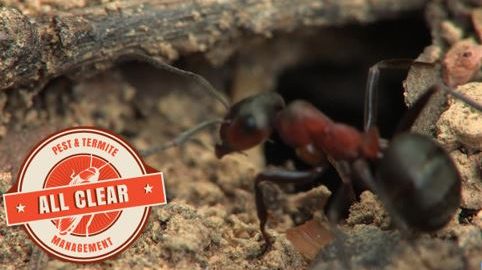 Question? When is an Ant dead? No, not necessarily when life has left it.
Two days after dying an ant emits an odour or signal which the living ant smells and this dramatically changes the living ants behavior. Dead is what you smell if you are an ant and before 2 days ants don’t recognize the ant as being dead. Once the ants have received this signal that the ant is dead they carry the corpse through the colony to dispose of it in the designated graveyard and dumps it on the pile of also-dead ants. This is the pile of grit you may find on the floor in the corner of a room.
If a tiny drop of Oleic Acid, an artificial chemical created to copy the odour of a dead ant as ants communicate by smell, was placed on the live ant it sends out to the other ants a signal that tells them that this ant is dead.
So what do they do?
They carry it out to the grave yard although it is still kicking and dump it on the already-dead pile.
When the ant dusts itself off it returns to the colony it will be repeatedly thrown out until the odour wears off and it is accepted back as a “Living” ant. This could be the “Living Dead”.
From an ants point of view would you say “I’m Dead” or “I’m Alive & Kicking”.
Sight and sound is not the only way Earthly organisms communicate. Taste and smell is another way an enormous number of creatures- ants included- share information.

AN INTERESTING FACT ABOUT ANTS .

Ants don’t have leaders they self regulate all their movements, like a large flock of birds flying, as this is a natural instinct. So when you see a swarm of ants on the move they instinctively know where they are going and what they are doing.